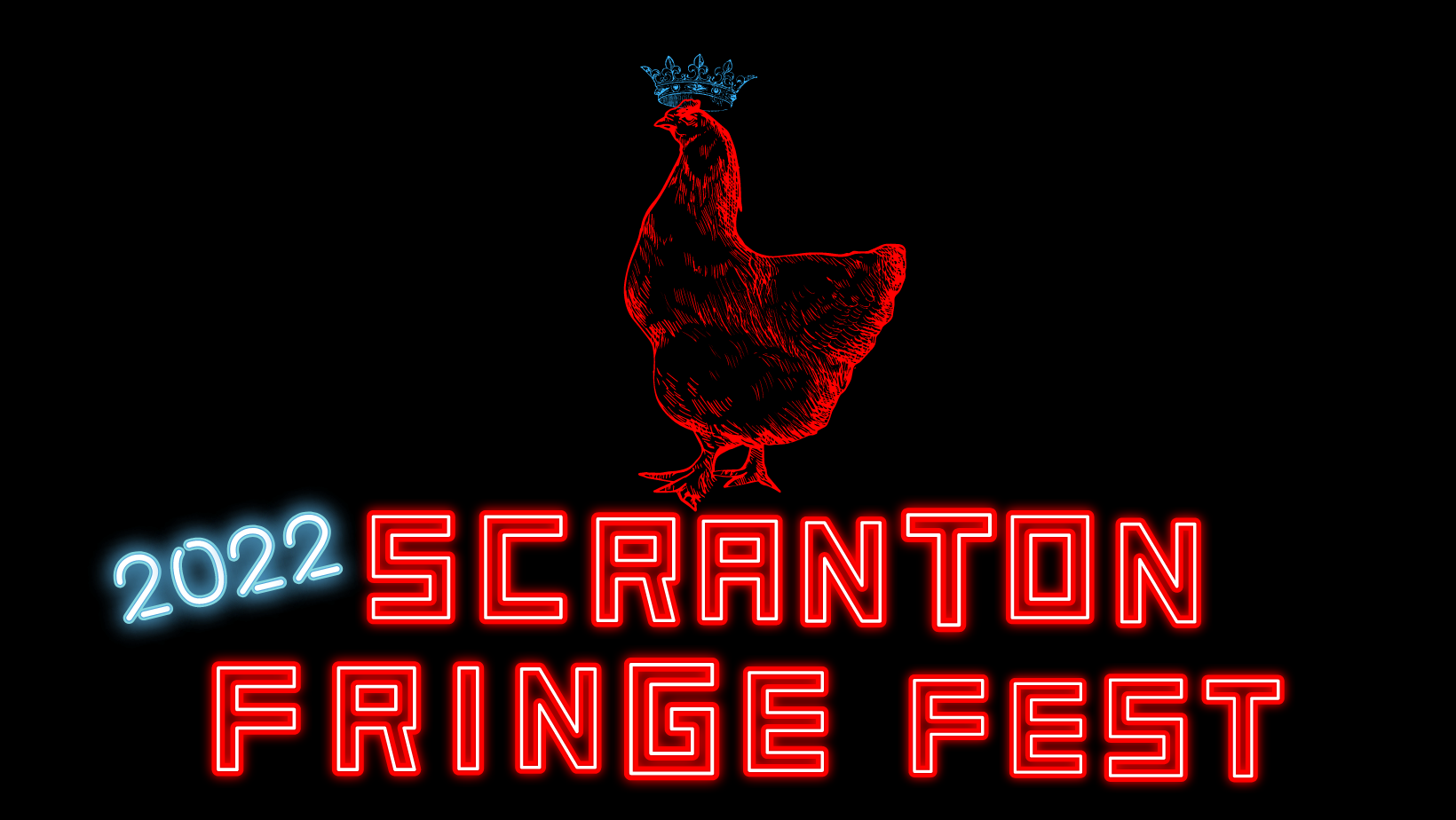 We are THRILLED to begin announcing some of the amazing shows that you will be able to catch at the 2022 Scranton Fringe Festival! We cannot wait to bring a bit of extra light to the Electric City this fall (September 29th – October 8th) for this Festival of culture, creativity, and community!

Please note these are NOT all the productions and special events in store for the 2022 #ScrantonFringe Festival! We will be announcing more performances and special programming in the weeks to come including an incredible all ages concert, events at the Lackawanna County Children’s Library, late-night gatherings, and much more!

The following productions ticket sales will launch next week — stay tuned and spread the word!

*** Romeo + Juliet by William Shakespeare ***
With each reimagined production, history’s most famous tale of star-crossed lovers hits differently. Yet, it always hits. How are we to believe families could feud so blindly, Romeo and Juliet love so deeply, or things derail so quickly? And yet, we do. Because we always need to believe in passion and remember that responsibility for the future lives first in ourselves and then in hope for those who follow. Gaslight Theatre Company’s Romeo + Juliet presents vibrant young love and intense rivalry in a timeless production that respects and makes accessible Shakespeare’s tragedy for new and returning audiences alike.

*** Ladies of the 80s ***
Take a trip down memory lane with the girl next door, the sex kitten, and the hard rock chick as they celebrate the instant stars of the 80s. This totally tubular event of the year is coming to Scranton Fringe as LIC Productions presents Ladies of the 80s! If you’re looking to get radical and express yourself, motor on over to this most excellent show. Go head over heels for our gnarly tribute to 80s mega icons like Madonna, Tina Turner, Gloria Estefan, Cyndi Lauper, Diana Ross, and more. With all of these legit jams, it is the perfect show for girls (and guys) who just wanna have fun!

*** Taking Up Space Film Festival ***
This special venture is presented by Park Multimedia, Black Scranton Project, and Scranton Fringe. Taking Up Space Film Festival is seeking stories that are created and told by BIPOC (Black, Indigenous, Persons of Color) filmmakers. The purpose of the film festival is to lift the voices of historically excluded racial and ethnic narratives

*** Young Goodman Brown, A mini-Opera ***
The Perspective Collective invites you on a journey into some dark places through a new Mini-Opera. Join us for an immersive, walking adventure through Stephanie Leotsakos’s Mini-Opera adaptation of Young Goodman Brown. Based on Nathaniel Hawthorne’s short story, it is the tale of a pious villager in puritan New England who ventures deep into the woods one night, and discovers a sinister secret that will call into question everything he believes in. Bring your walking shoes as we will venture through different locations within downtown Scranton along the way. Join us – if you dare!

*** In Search of Marjee ***
“In Search of Marjee” is an all-original musical that will be performed by PATAsphere, the same company that brought “Just A Penny” and “North Star Alley” to the Scranton Fringe Festival in 2018 and 2019. Through a compelling combination of storytelling, songwriting, and dance, “In Search of Marjee” addresses the social pressures faced by teenagers and parents in a community upended by the recent disappearance of a local high school student. “In Search of Marjee” explores issues facing teenagers today such as acceptance, belonging, non-conformity, peer pressure, bullying, and more.

*** Then She Ran: A Modern Folktale Musical In Concert ***
Then She Ran is a modern folktale musical that follows three women from different generations, each at a crossroads moment in their lives, who run away and land in a dark, swampy, other world. There they meet a group of vagabond artists called the Bone Crew who use music, in exchange for secrets, to guide lost people toward their truth. Set to an Indie-American-Gothic score, Then She Ran disrupts the notion of the classic hero’s journey, it’s about letting the subconscious guide us through fear, trauma, and change where music unlocks magic, and all are responsible for each other’s empowerment.

*** Bird Thief ***
What earnestly began as a collegiate capstone project, Angela Klawiter’s debut work has grown some wings in its public premiere. Bird Thief, an original one-woman play, explores crises of faith in the face of deep wounds- both what it means to forgive and to be forgiven. Intertwined with bites of humor, Bird Thief seeks to ask big questions and implore the world to do better by the wounded. Please note, that due to the difficult and potentially triggering nature of topics contained in the play, audience discretion is advised.

*** Watch Your Step!: A Show of Improv, Storytelling, and Unheeded Warnings ***
“Watch Your Step” is a show of improvised storytelling and comedy. Come and experience stories about true-to-life cautionary tales and (un)heeded advice, as improvisers turn the words of local storytellers into inspired, unscripted scenes. Each show features a new storyteller with a different bit of advice or wisdom guiding our daily lives. “Watch Your Step” hopes to explore these stories with humor, respect, and a shared commitment to spreading joy and awareness through an interactive show.

*** Tomatoes Tried to Kill Me But Banjos Saved My Life ***
Fresh off a successful run at the Edinburgh Fringe Festival. One of 18 worldwide ‘Best of’ shows selected to participate in the Fringe Encore series, Off-Broadway. Sell-out run.

*****Global TV Edmonton. *****
Winnipeg Free Press. An inspirational true story about overcoming obstacles, pursuing passions, and the healing power of music. A heartfelt passion project that began as an idea after a devastating life event caused Keith Alessi to think differently about his future. “I’ve seen many, many one-person autobiographical shows over 20 years of Rogues (Fresno Fringe), and this is one of the best” -Monro Review

*** The Vole Sisters Invite you to A Peculiar and Intimate Evening of Mystic Spiritualism ***
In 1848, Margaretta and Katherine Fox became the founders of the great American Spiritualism Movement. World famous for their mystical seances and communion with the dead, their abilities were later revealed to be a total hoax. Elsbeth and Fatima Vole would like to affirm that they are NOTHING like those scuzzy, scammy con artists, the Fox Sisters. Their numinous talents are 100%, completely, and utterly AUTHENTIC. Join Double D (Graceann Dorse and Nannette Deasy) as the legendary Vole Sisters in this mostly improvised/partly scripted/completely hilarious paranormal comedy.

*** The Eight Offices of Transformation ***
Enter the Eight Spaces of Transformation. Meet your guides,The Foolbright Scholars, two bewildered and confident, disgruntled and delighted pathfinders of stumbling revelation. As the Foolbrights map wisdumb in this confusing and celebratory world filled with feelings and sensation, you’ll explore playful movement, linguistic gymnastics, satire, absurdist surveys, and transcendent ridiculousness. In an eyelash flutter it’s a full tilt emergence as you exit the tour, having unlearned everything and somehow knowing more.

*** On The Spectrum ***
“On the Spectrum” written and performed by Blaize Berry and Marybeth Berry, explores the real and sometimes raw emotions of the effects of an Autism Spectrum Disorder diagnosis. Varying from the perspectives between both a son and his mother, this play will take the audience on a deeply personal journey of discovery. The result is a dynamic dialogue with blended gestures and movement pieces between mother and son that examines the innermost fears and triumphs that forge the path between the peaks and valleys of the society they face whether together or apart. This show is Directed by Tyrie K. Rowell with Music & Lyrics by Alex Lefevre